The Allure of Ruins

Ever wonder why so many D&D (and other fantasy adventures) are set among ruins? The abandoned tunnels beneath an old castle is such a trope that we refer to it as a "dungeon crawl". If you remember the Lord of the Rings, Middle Earth was festooned with ruins, relics of an earlier, grander, age. In my own campaigns, if I add in a lone statue as a descriptive note or put a ruined house on a ridge overlooking the valley through which the characters travel, I can almost guarantee that one of more of the players will want to go explore it. Why our fascination with ruins? This column from the BBC says ruins and lost civilizations have fascinated humans since at least the 6th Century BCE
Posted by Castle Perilous Games at 7:30 PM No comments:

The Jade Hare, a D&D module from 1992, sold for over $18,000 on eBay on January 3. Before you go frantically searching through your closets looking for similar items:

1. This was mint in the original shinkwrapping
2. The starting bid was $19.99 so no one expected it to go for that much
3. This was a limited edition promotional module given out with purchases by the TSR Mail Order Hobby Shop.
4. Unlike most other TSR books and modules,  there was only one print run of the original adventure.
5. If you really want a copy, you can pick up one for $1.49 in PDF format.
Posted by Castle Perilous Games at 1:02 PM No comments:

RPG of the Week Dream Park 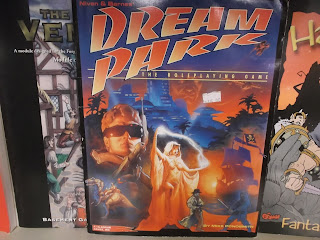 A precursor to modern MMOGs and LARPs, the 1981 novel Dream Park, postulated a world in which GMs were treated like rock stars as they created virtual/real worlds in which, for a price, real people could adventure. Players adopted the persona of their character and the tech postulated in the novel allowed magic and SF concepts to work. In 199, R Talsorian Games licensed the rights to the novel to produce a RPG in which the players played players who were playing characters in the world that the DM, who also existed as a DM in real life as well as in the game, created. Interesting concept and it did well enough for R. Talsorian to produce two adventures.

Posted by Castle Perilous Games at 7:38 PM No comments:

Interesting read from someone who works in the board game industry on consumer purchases of boardgames. Unlike books, where you usually purchase a book based on the author, boardgames (and TCGs and RPGS) are usually purchased based on the brand. Most Magic players have no idea who is the current Magic sets, much as RPG players have no idea who wrote Xanathar's Guide to Everything, despite the book topping the NYT best seller list. In spite of how popular Scythe is, I would doubt that players know who the designer is (Jamey Stagmaier) or even the name of the publisher (Stonemaier Games).
Posted by Castle Perilous Games at 1:17 PM No comments:

Yesterday, WOTC announced the banning of 1 rare, 2 uncommon and 1 common cards from Standard format tournament play. The rationale for the banning is that the 2 decks running combinations of these 4 cards dominated the Standard environment, getting played in about 40% of games tracked by WOTC at the Pro level of play. Rampaging Ferocidon has already dropped in price from an average of $4 to as low as 75 cents from one online retailer

WOTC gave the following three reasons for the banning:

Posted by Castle Perilous Games at 12:00 PM No comments:

Below is a press release from Black Planet Publishing touting their new GN series Silver. We will bring in copies of their Free Comic Book Day giveaway to gauge interest but will only stock in if we get an order for it as the track record for independent GNs here is not that great. Let us you if you have an interest in it:


ears ago, Professor Abraham Van Helsing visited Dracula’s castle. Now his descendent, the mysterious vampire hunter Rosalyn Van Helsing, is teaming up with a master thief and his ragtag group of con men for a high stakes heist to rob Europe’s richest vampires. Welcome to the world of Stephan Franck’s SILVER, a globe-trotting graphic novel series that mashes up the world of Bram Stoker’s classic novel Dracula with action, adventure, humor, pulp storytelling and modern sensibilities.
This year, SILVER, is coming to a comic shop near you as a 4-volume set of trade-paperback graphic novels. SILVER writer and artist Stephan Franck tells us more:
SILVER begins 40 years after the events of Bram Stoker’s Dracula. We are in 1930’s New York city, where we meet a new character: conman and master-thief JAMES FINNIGAN. Finn kicks off the story by robbing a children’s charity auction, so clearly, karma-wise, he has some room to grow. The items up for auction are from the Harker family, a surname Dracula fans will immediately recognize. Then, thanks to a strange discovery at the end of Chapter One, a door will open on a new mysterious world of mortal undead danger and fortune untold. That’s too much for a thief like Finnigan to resist.
The adventure that follows is epic and super fun in the great Pulp tradition, but also an awesome opportunity to explore character. To me, con men and vampires are mirror images of one another. They live predatory, solitary lives on the outskirts of things and  don’t engage emotionally like other people do. The mash-up raises interesting questions, like “what does it really mean to feel alive?” Is it just about cheating death for a thousand years, becoming rich beyond your wildest dreams, or is there something more?
Finnegan immediately understands that, to take on the vampires, he will need a specialist. Thanks to Harker’s ledger, he locates a mysterious young woman known as “SLEDGE”, AKA ROSALYND VAN HELSING—the famed professor’s grand-daughter, and last of the Van Helsings.
Sledge carries on the family tradition of ridding the world of the vampire scourge, but it appears that she may have spent a little too much time lurking in cemeteries making sure the dead stay dead, and she’s pretty close to a complete spiritual burnout. She’s not someone easy to access, but eventually warms up to Finn’s scheme. Sparks fly as soon as they meet!
While we uncover a secret world of vampires, and while we have tons of fun with a super gothic/romantic take on DRACULA himself, SILVER is first and foremost a relentless Pulp adventure. The epic set pieces build one after the other, and the cons keep on coming.
My hope is that some will make you laugh, some will break your heart, some will have you on the edge of your seat, and that all of it will keep you guessing until the very end!
Posted by Castle Perilous Games at 8:02 PM No comments:

This week's Rolling for Initiative column looks at the growth of counterfeiting in the gaming industry.This had been a problem with TCGs ever since the 1990s, with RPGs since the advent of the PDF and now with boardgames, due to the ease of accessing cheap overseas manufacturing.
Posted by Castle Perilous Games at 1:14 PM No comments:

The Terrifics and Dark Nights Rising: The Wild Hunt

For you comic fans, we received the following press releases from DC:

THE TERRIFICS #1 features art by Ivan Reis and Joe Prado with a story by Jeff Lemire and a cover by Reis!
Bound together by fate, united by the spirit of exploration and hope for tomorrow, the Terrifics bound from the Dark Multiverse of METAL! When Mr. Terrific, Metamorpho, Plastic Man and Phantom Girl find themselves literally bound together by a tragic accident, our team of unlikely allies must rely on one another to make their way back home. But a startling revelation on their return trip brings them face to face with a new mystery: where in the universe is Tom Strong?
Like all debut issues in the New Age of DC Heroes line, THE TERRIFICS #1 features an unprecedented vertical foldout cover. Plus, the back of the foldout cover features a sliver of an illustration of all the new heroes who are joining the DC Universe. Customers who purchase all the #1 issues will be able to assemble the full-size artwork from the foldouts. On sale February 28.

Dark Nights Rising:  The Wild Hunt
The special issue that continues from the pages of the bestselling DARK NIGHTS: METAL has added Grant Morrison to its creative team!

This issue is now written by Scott Snyder, Grant Morrison, James Tynion IV and Joshua Williamson, with art by Howard Porter, Doug Mahnke and Jorge Jimenez and a foil-stamped cover by Mahnke.

The Dark Knights ride through the farthest reaches of the Multiverse to track down the unlikeliest of teams: The Flash, Cyborg, Raven and Detective Chimp. The mission: keep these heroes from completing their desperate quest to save all of existence! Plus, Challengers' Mountain crackles with dark energy that will release an army of the world's worst nightmares into the streets of Gotham City!

This one-shot also answers the question: Where are the Metal Men? And who is the latest addition to the team? On Sale Feb. 14.
Posted by Castle Perilous Games at 6:46 PM No comments: 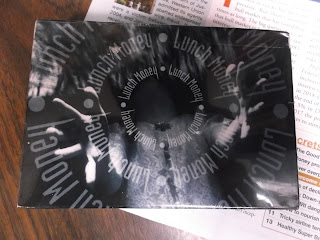 When people think of game protests, the first game that comes to mind is generally Dungeons and Dragons, which had quite a track record of people protesting it during the 1980s and 1990s. More recently, people have protested the racism in Cards Against Humanity. We had a few people protest D&D back in the 1990s but the only other game I ever recall having protested is the one above:  Atlas Games Lunch Money.

Lunch Money is a game of school yard combat. Each player has 15 points and a handful of "Hit"  cards, such as Kick and Punch, to do damage to your opponents. The image on the card is that of a pre-teen girl generally staring angrily at you.

Some years ago, while set up at a convention, I sold a copy of the game to a pair of teenage boys, since the theme of this game typically appeals to teenagers. They took it off and about an hour later, I had an angry mother dragging a con staff member up to the table, wanting to know  if I knew the contents of the game I was selling and why I was selling something that her 5 year old daughter was watching people play. The staff member and  I finally managed to point out to her that:  1. It was a card game and 2. we had no control over what her daughter did. Somewhat mollified, she finally left with the staff member and I heard no more about it. Still, that and D&D are the only two instances of protested games we have had. So, if you want the opportunity to own a protested game and don't want to go the Cards Against Humanity route, I recommend Lunch Money.
Posted by Castle Perilous Games at 2:25 PM No comments:

This week's Rolling for Initiative column looks at some of the activities the Game Manufacturer's Association performs
Posted by Castle Perilous Games at 12:24 PM No comments:

What A Long Strange Fantasy Trip It's Been

This week's Rolling for Initiative column looks at the return of Metagaming's The Fantasy Trip, probably later this year
Posted by Castle Perilous Games at 8:07 PM No comments: