We were going though a stack of old SPI wargames, and when I say old, I mean mid 1970s era, checking to make certain that they had all the counters, maps, instructions and tables.  It started me thinking about how few historic war games, with the exception of Axis and Allies, sell today.  We have a number of old SPI, Avalon Hill and GMT wargames in stock but only sell a couple a year.  People look at the ones we have on display and older customers reminisce about playing them in their younger days, but, unlike those games who reminisce about playing D&D, the wargame nostalgics never buy the games of which they speak so fondly.

There are two reasons for this, I think.  One is the space, or lack of it.  Older RPG books, modules and accessories take up very little space in the house, fitting thin and flat upon a bookshelf.  The thicker and bulkier boxed wargames take up much more space and are awkwardly sized, not easily fitting on a shelf, and, in the case of the plastic tray SPI games, easily fall or crack open as their decades old plastic cases turn brittle and shatter.

The second reason, and the one that influences the decision more, is the very nature of RPG books versus wargames.  It is very easy to pick up a RPG book and flip through it, stopping and reading passages that catch the eye, easily getting transported back over the years.  Wargames don't lend themselves to this ease of perusal.   Flipping through the pages of fairly dry wargame rules and running your fingers over maps and counters just don't bring back the same feeling that the pages of a book do.
Posted by Castle Perilous Games at 2:42 PM No comments:

5. Smash-Up  (AEG)
A fast, crazy, easy to learn game that can be played anywhere, at any time.

4. Fleet (Gryphon Games)
Here's the thing with this game: We played it, we loved it, but it's hard to find another game to compare it to. It's unlike anything we've played! It's part deck-builder, part engine-builder, part drafter. And the way the game's theme is pulled off is way cool!

3. Trajan (Hutter)
Ryan Metzler from Dice Tower said it was his favorite game at the con. And then it proceeded to sell out in just under 36 hours.

2. Level 7 [escape] (Privateer Press)
Another game that's unique to the point that it's hard to draw comparisons, we watched people line up all day to get this game. And there's a cool promotion where you can get your picture turned into a character card! Players spoke highly of the replay value and innovative mechanics.

1. Netrunner (Fantasy Flight Games)
The line for this game wrapped around 8 different booths then extended down an entire wall of the convention center. It was the biggest line for a product at Gen Con that we had ever seen. And it triggered an online buzz around the country that was not rivaled by anything else at the show. Get this game.

Posted by Castle Perilous Games at 7:00 AM No comments:

The store had the opportunity to host Merle Rasmussen and his wife Jackie for a couple of hours earlier this month. Who is Merle Rasmussen and why would we want to host him and his wife?  Well, it depends on how long you have been in the game industry.  Merle Rasmussen, along with Allen Hammack, is the designer of the first espionage role-playing game, as well as one of the earliest RPGs to emphasize character skills over character classes and use percentages to determine outcomes, Top Secret.  Many nights during the early 80s, players tiring of crawling through dungeon tunnels and cells opted for an evening sending secret agents prowling on missions through the dark streets of Sprechenhaltestelle.  “Operation: Sprechenhaltestelle”, the module included with Top Secret, was also one of the first to provide a setting for the gamemaster with numerous adventure seeds rather than a fully laid out adventure.  Players could (and did) spend weeks exploring the various nooks and back alleys of Sprechenhaltestelle, as long as they had a gamemaster willing to put in the work to bring the city to life.
The success of Top Secret led to a game design position at TSR from 1982 to 1984, where Rasmussen, assisted by Jackie on occasion, designed some of TSR’s earliest solo adventures including Ghost of Lion’s Castle, Lathan’s Gold and the Magic Viewer adventure Midnight on Dagger Alley (It came with a piece of transparent red plastic you held over various spots in the adventure to read what the outcome of an action was.  Few copies available today still come with the original Magic Viewer), as well as Quagmire and Savage Coast for Dungeons and Dragons, Range War for Boot Hill and Ace of Clubs and the Top Secret Game Companion for, well, you know.
After his stint with TSR, Rasmussen held a variety of jobs in his native Iowa, before going to work for Casey’s General Stores in 1988, where he still works, currently as a property management specialist/archivist, which occupied most of his time for the next decade or so, though he did sell the store copies of his Sqwurm and Beasties games, developed in the mid 80s, since then, which is how I have kept in contact with him.
Rasmussen got back into game design, this time focusing on card and board games, after the turn of the century and has been fairly prolific since then, with Keep Iowa Beautiful Travel Bingo, Knoxville Raceopoloy, Caseyopoly, Iowa State Fairopoly, and Newtonopoloy (all designed as promotional games for various organizations, as well as Lutheropoly and Stagecoach King, (one copy of each designed for private collectors).  Rasmussen’s latest work is Save Your Brain, a card game designed for the Advisory Council on Brain Injury to promote brain injury awareness, which proved popular enough to warrant a second print run and second edition.
So, for those of you hoping to enter the field of game design, let Mr. Rasmussen’s career serve as an example of one way to do it.  Sure, he doesn’t make a living at it, but he does get to do what he loves and people do pay him for it.
Posted by Castle Perilous Games at 7:00 AM No comments: 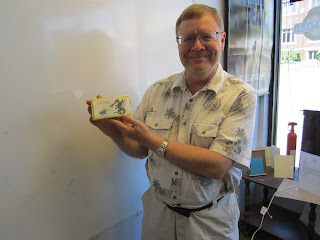 Had the opportunity to have Merle Rasmussen in the store the morning of August 6.  Who's Merle Rasmussen, you ask?  Rasmussen was a writer for TSR during the early 80s and the designer of one of the earliest espionage RPGs, Top Secret.  Rasmussen is also the writer behind the 1980s modules Savage Coast, Midnight on Dagger Alley, Ghost of Lion Castle, Quagmire and Lathan's Gold, all of which were solo adventures, a rarity for the time.

In recent years. Rasmussen has worked as a property management specialist for Casey's General Stores, while shifting his game design focus to card and board games.  In recent years, he has released Save Your Brain (brain injury/awareness card game), Keep Iowa Beautiful Travel Bingo, Caseyopoly and Iowa State Fairopoly, as well as the Sqwurm card game, which Rasmussen is holding.

For those interested and who would like a better idea of what sells here in the store, here is a rough breakdown of categories and percentage of sales.  Note that since this is an approximation, the percentages probably won't add up to 100%:

Posted by Castle Perilous Games at 8:16 PM No comments:

See part One for the setup:

Handicapped accessible means something different there.  One of the stores I visited had a "Handicapped Accessible" logo on the store door.  In the States, this means the store is laid out with wide enough aisles inside for a wheelchair to traverse and aramp or some other way for a chair to get to the door.  Not in France.

From what I was told, the "Handicapped Accessible" sign means there is a handicapped parking space in front of the store, which there was. However, the door was positioned a couple of inches about the sidewalk on a doorsill, meaning someone in a wheelchair would have to get over that bump while trying to get through the door, which did not automatically open.

Further, the layout of the store's aisles was such that, while a wheelchair could move through them, they were narrow enough that someone else could not be in the aisle as well.  I did not see any wheel chairs in the store wile there but I did see a woman maneuvering a baby carriage through and there was not enough room left on either side for her to get around anyone standing there.
Posted by Castle Perilous Games at 7:00 AM No comments:

Only War is a standalone Warhammer 40,000 roleplaying game experience in which players take on the roles of soldiers in the Imperial Guard, the galaxy-spanning armies of the God-Emperor. Fully compatible with FFG’s other Warhammer 40,000 Roleplay titles, this comprehensive game system explores a previously unseen side of life in the Imperium of Man. Join the ranks of brave men and women inducted into the God-Emperor’s armies, trained to fight and sent off to far flung stars and systems to hold the line against the coming night. Despite overwhelming opposition, or perhaps because of it, these fearless soldiers are bound to each other by a code of brotherhood and honor. They are the thin line that protects the Imperium from complete and utter destruction. They are the Imperial Guard.

Arriving in August
Posted by Castle Perilous Games at 11:00 AM No comments:

See Part One for the setup:

1.      A Sense of design pervades the store.  Unlike many American game stores, which have a mishmash of fixtures from different sources (mine included), here, with the exception of displays provided by the manufacturer, store fixtures all matched, avoiding the jarring effect of bookcases interspersed with rolling video racks or three different styles of display cases making up the cash wrap.  Colors and shelf design were consistent throughout the stores, creating strong eye appeal.
Posted by Castle Perilous Games at 6:00 AM No comments:

Posted by Castle Perilous Games at 9:00 AM No comments:

See Part 1 for the set-up

1.      Playspace is at a premium.  Both stores had gaming areas, but less than a quarter of the size of the playing area you would find in a typical US store. Both were located on an upper level, accessed via a very narrow staircase, overlooking the store below, meaning that customers in the retail part of the store could easily hear people playing and talking in the gaming space above.  Each area could seat anywhere from 6 to 12 people comfortably but not much more than that.  I also didn’t notice many of the posters that cover the walls of a typical American game store.  Whether that is due to aesthetic choices on the part of the store or a lack of promotional posters received by the store, I am not sure.
Posted by Castle Perilous Games at 6:00 AM No comments: