Taking on Reaper's Bones line head on, WizKids announced a line of unpainted miniatures licensed from Dungeons & Dragons and Pathfinder and featuring sculpts of characters and monsters from both lines.  Here is more information:


As many of you may have already heard, only a few weeks ago we announced a brand new line of unpainted miniatures, featuring more than 150 unique fantasy sculpts, set to be released in Q4 2016. With this release, we plan to raise the bar on collectible miniatures and blaze the trail for an era of highly detailed, desirable and affordable minis. We’d like to take some time to delve deeper into what you can expect with this upcoming and highly anticipated release, and hopefully answer any questions you may have.

We plan to roll out our new unpainted minis line with a number of our distinguished fantasy licenses.  Additionally, there will be a WizKids house brand of unpainted minis available in our offerings. Where fantasy licensed branded minis will focus on famous creatures and characters, WizKids house brand minis will focus on environmental set pieces to enhance our player’s and collector’s game experiences.

Our team is working hard to ensure WizKids unpainted minis are highly detailed, incorporating scaled features with deep cut details, so your customers can look forward to easier hand painting.

The unpainted minis line will not follow our historical collectible business model. Instead, it will focus on single repeat purchases, displaying the high quality minis in striking, yet visible, packaging.  Customers will be able to see what they are buying on your shelves.
The collection will include characters, creatures, and even scene-building elements, all available in three types of specialty packs that will each contain a variety of sculpts (most of which will come fully assembled):

Level Up Packs will include two (2) figures per pack, one standard and one advanced. Here is an example of a standard and advanced character. Note the level of detail in each figure and the many facets and intricacies between each. 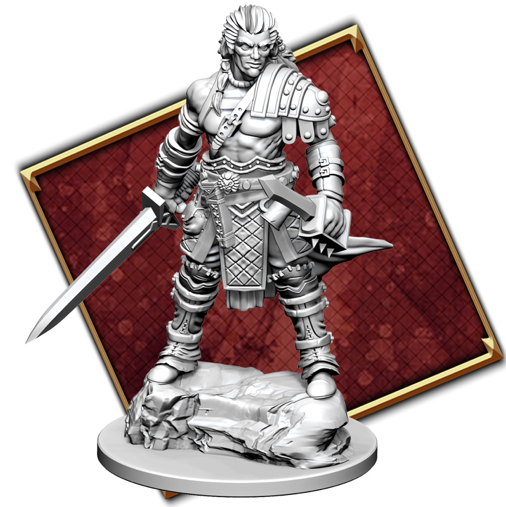 Standard character has decent armor to protect him in battle. But just wait until he levels up… 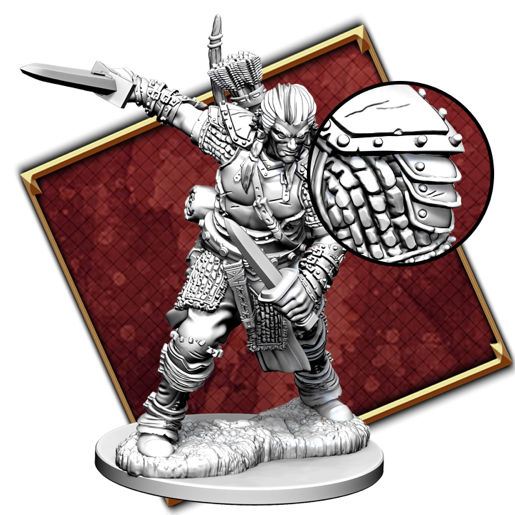 There will be a vast assortment of both male and female characters from a variety of classes and races in the initial release of unpainted minis. For example, look for generic and iconic heroes, monsters and more!

Prices tend to vary widely when it comes to unpainted minis in the marketplace. Most of our unpainted minis will be priced at $2.99-$3.99 depending on the pack, making them a great value for your customers.

Our unpainted minis will come pre-primed with Acrylicos Vallejo primer so they are ready for hand painting right out of the box. Acrylicos Vallejo is a long running industry standard, known for their specialized high-quality paints.

The unpainted minis line will not be exclusive to a single distributor. Instead, we are taking a multi-distributor approach with this release. A full list of distributors carrying the line will be announced in the coming months.

Consideration has been made in the packaging design, ensuring it is sized to fit on existing slat wall/peg systems. Packaging can also be placed on shelves, or any easily accessible location for your customers.

Here is a sample of what’s to come!

Look for this set to hit your shelves later this year.  Until then, we encourage you to offer plenty of opportunity for pre-orders within your store.
Posted by Castle Perilous Games at 11:10 AM No comments:

Four Thoughts on the GTS

This week's ICV2 column covers some follow up thoughts from the recent GAMA Trade Show.
Posted by Castle Perilous Games at 8:03 AM No comments: 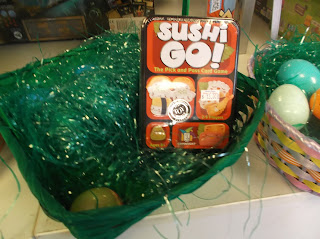 If you are looking for items for an Easter basket for the gamer in your household, I have a few suggestions, all of which are small, fun and look good in a basket. First is Sushi Go, which won a Best Toy Award from the Openheim Toy Portfolio. Suitable for ages 8 and up, 2-5 can play in 15 minutes or so. 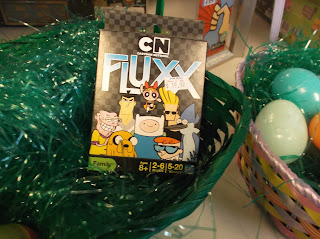 Next is Cartoon Network Fluxx. Fluxx has won several awards over the years, including a MENSA Select. Kids recognized the Cartoon Network characters and this version is suitable for ages 8 and up. 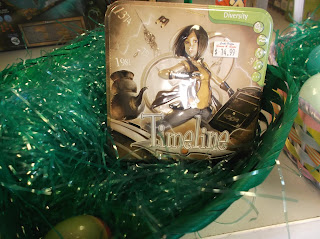 Last but not least is Timeline from Asmodee. I have played this game with 2nd graders who did suprisingly well. Packaged in a tin, it looks nice in a basket and offers lots of replayablity.

Posted by Castle Perilous Games at 8:32 PM No comments:

Here's a link to the card list for Shadows over Innistrad along with current pre-release pricing from TCG player. No card is currently higher than $30 and all of the higher priced cards are trending downward
Posted by Castle Perilous Games at 9:50 PM No comments:

3 and a Half Questions Answered

Well, I got three and a half questions answered of the 5 I wanted to get answered at the GAMA Trade Show.  WOTC not having much presence there made it hard to ask questions about Magic pricing and their boardgame catalog.
Posted by Castle Perilous Games at 7:38 AM No comments:

I headed out to the annual GAMA Trade Show in Las Vegas this week and coincidentally, this week's ICV2 column focused on 5 questions I hope to get answered
Posted by Castle Perilous Games at 2:11 AM No comments:

Konami has launched a promotion for schools whereby they receive a coupon for a free Yu Gi Oh deck. They bring the coupon to local stores and the store gives them a deck from their stock. Retailers then contact Konami and get sent a replacement deck from Konami stock. Unfortunately, there is no guarantee that stores will receive the same deck or even a recent deck. From the working of the promotion, stores will get whatever deck Konami has on hand, which means a deck that was not particularly sought after as the popular decks are already sold out.
Posted by Castle Perilous Games at 1:37 PM No comments:

This week's column is on the launch event, or non-event, for the new Curse of Strahd campaign for 5th edition D&D
Posted by Castle Perilous Games at 11:48 AM No comments: