RPG of the Week No Thank You Evil 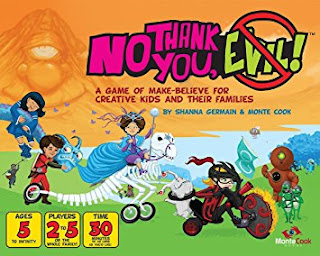 No Thank You Evil is a RPG system from Monte Cook Games targeted at beginning players. As the cover says "Ages 5 to Infinity" . The system is quite simple and relies on die rolls and tokens. As in almost RPGs, the gamemaster guides the game and creates the adventure. Whenever the players have want to attempt something, the GM sets a "goal" from 0 to 8. A goal of 0 is something the players can easily accomplish, such as walking or talking. Higher goals are set for more difficult activities. The players can spend tokens from their characters to make accomplishing the goals easier.

I had the opportunity to play No Thank You Evil a few weeks ago. It plays well, comes with lots of components and bits and a session can finish in about 30 minutes or extended longer if the players remain interested. If you are a parent looking to introduce your kids to RPGs but think D&D is a bit too complex, No Thank You Evil is a great alternative.

Posted by Castle Perilous Games at 9:27 PM No comments:

This week's Rolling for Initiative column recaps my conversation with Brendan Bell of Asmodee NA over Force Friday
Posted by Castle Perilous Games at 10:21 AM No comments:

RPG of the Week 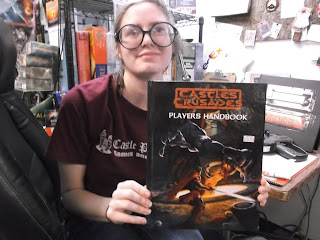 Since we stock a whole lot of role playing games (RPGs) and sell very few of them (we sell 5 times as much D&D 5th edition per month as we do all other RPGs combines) we decided to start talking about one of them once a week in the hope of calling your (yes you) attention to some of the fine ones out there. We will also be doing this with some of the less popular boardgames we stock as well.

This week, we feature Castles & Crusades. This RPG dates back to the 3.0 D&D boom when dozens of companies brought out all sorts of RPG supplements for D&D under the OGL. Castles & Crusades is one of the very few companies (Paizo's Pathfinder RPG is another) to still survive from that era, the tagline being "Third edition rules, 1st edition feel." Troll Lord Games has always focused on recreating the style of adventures from the early days of D&D and AD&D, before there was a heavy emphasis on plot and campaign and adventures stood on their own, rather than linking together.

While characters have skills, character class is a major focus of C&C, much as it was in early AD&D and your character class defines what your character can do. If you like D&D 3.0 (or 3.5) or the play of Pathfinder, but Pathfinder has gotten too complex and materials for D&D 3.0 and 3.5 too hard to find (it is out of print after all), take a look at Castles and Crusades.
Posted by Castle Perilous Games at 8:14 PM No comments:

In this week's Rolling for Initiative column, if you are interested in opening a game or comic store, or running a store in general, I would recommend reading these three.
Posted by Castle Perilous Games at 1:06 PM No comments:

Figured it might be helpful to post a list up of the benefits you get here by earning a Preferred Customer Card. Remember, you earn one of these once you turn in 10 filled out Castle Cards. You do not need to turn in the Castle Cards all at once but will received Preferred Customer status once you give us your 10th card. Here are the current benefits:

15% off all purchases, excluding snacks and tournament entry fees
1 extra free item on Free Comic Book Day, Free RPG Day, Batman Day and Halloween Comicfest
1 extra ticket during our Halloween, Christmas and anniversary drawings
1 free game rental per month
Waiver of a deposit on all game rentals. However, you are still responsible for late fees and failure to pay those will result in loss of Preferred Customer status.
Posted by Castle Perilous Games at 3:09 PM No comments:

If you are a teacher at any of the local schools, you may rent any of the games in our game library for a week for free and will not need to leave a deposit. This includes games such as Munchkin, Settlers of Catan, Tapple or anything else, with the exception of certain rare games such as Conquest of the Empire. Just show us a faculty ID and we will take care of the rest.
Posted by Castle Perilous Games at 8:53 PM No comments:

Games Workshop has reclaimed the rights to the Talisman board game from Fantasy Flight Games so we can expect to see most of the expansions back in stock by Halloween:

Posted by Castle Perilous Games at 6:13 PM No comments:

The major gaming distributors hold "open houses" each year for their retailer customers. I went to the Alliance one this past weekend and this week's Rolling for Initiative column looks at four things I took away from it.
Posted by Castle Perilous Games at 10:14 AM No comments:

We have added a couple of new benefits to the Preferred Customer Card.

1) You receive 1 FREE rental per month of any rentable game in the game library.

2) Although you still have to pay the rental fee, we will not ask for a cash or credit card deposit when you rent a game. Just show us your Preferred Customer card and we will note that on the sheet. You will still be charged late fees for bringing the game back late and refusing to pay those will cause you to lose Preferred Customer status.
Posted by Castle Perilous Games at 11:29 AM No comments:

For those interested in the business side of the gaming industry, this week's Rolling for Initiative column looks at some suggestions for improving the retail side of Force Friday
Posted by Castle Perilous Games at 9:24 PM No comments:

In case you would like to play games with the designers of Castle Panic and Here Kitty Kitty, FireSide Games will stop by on their Smash and Burn Tour on October 7th from 1 p.m. to 5 p.m. (or later depending on interest. Come play Kaiju Crush and Hotshots and bring your favorite Fireside Games (or buy a couple) and have them signed.
Posted by Castle Perilous Games at 7:34 PM No comments: