In their attempt to give stores more advance notice of new products, rather than the 1-2 weeks we get now, GW sent out this notice about their Space Hulk variant Lost Patrol about a month before the release. I rather think they are using this as justification for not giving us advance notice:  "See, we gave you information about the game a month early and sales were poor. Our way is still best."

Posted by Castle Perilous Games at 8:39 PM No comments:

Rivals of the Pharaoh

The September 15 release of Rivals of the Pharaoh promises some pretty spectacular cards for Yu Gi Oh:

Sometimes a friend, more often an enemy, billionaire Duelist extraordinaire Seto Kaiba pushed the Pharaoh to his limits from the very first episode.  His Blue-Eyes Ultimate Dragon’s signature move, Neutron Blast, is now a Spell Card that lets your own Blue-Eyes Ultimate Dragon attack 3 times in a turn – once for each head – without interruption! Duelists can also use knowledge of their own greatest rivals to their advantage with Lullaby of Obedience, a one-of-a-kind Spell Card that lets you play any monster you can name from your opponent’s Deck!

When the dust settled on the Battle City Tournament, it became apparent that Yugi’s mild-mannered schoolmate Bakura, possessed by the evil spirit of the Millennium Ring, was the Pharaoh’s true enemy all along. Fans have been requesting Bakura’s Dark Sanctuary Field Spell for over a decade, and now it’s finally here! While Dark Sanctuary is in play, every attack your opponent makes has a 50% chance of backfiring completely and damaging your opponent, plus you can also use your Monster Zones to complete the Destiny Board’s terrifying message and win the Duel automatically!

To free the Pharaoh’s soul from eternal imprisonment in the Millennium Puzzle, Yugi had to defeat him in one climactic Duel in Egypt. Yugi’s Silent Swordsman and Silent Magician monsters from that Duel represented his own personal growth throughout the original series, and now, 10 years later, those monsters have grown up too! These new monsters can shush Spell Cards while their Attack Points grow and grow throughout the Duel, eventually becoming strong enough to take down even the toughest monsters Dueling has to offer.

Last but certainly not least, you’ll even find cards used by Maximillion Pegasus and Marik Ishtar, the Pharaoh’s final opponents from Duelist Kingdom and Battle City, respectively.
Duelist Pack: Rivals of the Pharaoh contains 11 brand-new cards, and 46 cards in all: 24 Commons, 10 Rares, 6 Super Rares, and 6 Ultra Rares.
Posted by Castle Perilous Games at 12:47 PM No comments:

This week's column on ICV2 compares the year long promotional campaign AEG launched for its lines to the 2 week blitz GW did for Warhammer Quest
Posted by Castle Perilous Games at 2:56 AM No comments:

AEG: A Year of Promotion

This week's column on ICV2 looks at the promotional programs AEG has put into place for their product releases for the rest of the year.
Posted by Castle Perilous Games at 10:50 AM No comments: 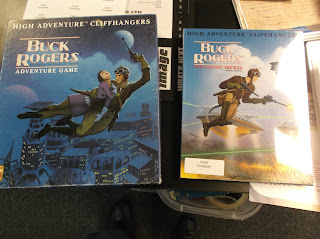 The Buck Rogers Adventure Game has an interesting history. HeroPress has information on the rules and content but I want to briefly touch on the backstory of the game.

Gary Gygax had just lost control of TSR, which he had actually had for a only brief period of time (read this for more details) and the reins of the company were now in the hands of Lorraine Williams, who, through her family, also owned the rights to the Buck Rogers character (do you see where this is going).

Since the rights to Buck Rogers were separate from TSR, Williams, while continuing to produce the company's mainstay D&D products, also directed TSR to produce books, boardgames, comics and RPGs utilizing the Buck Rogers license. This meant that TSR had to pay a licensing fee for use of the character to the Williams family for each publication. TSR's foray, under Williams' direction, into the Buck Rogers universe lasted from about 1988 until 1993 and, while Buck Rogers did not cause the collapse of the company (low cash reserved and high returns from the book trade did that), it did distract the company from focusing on its core product lines at a time when the company had significant penetration into the mass market but and needed management to focus on those product rather than promoting a product line based on a 50+ year old license.
Posted by Castle Perilous Games at 11:19 AM No comments:

Privateer Press put out a press release today indicating that all of its North American distributors have signed up to its "no free riders" policy, which Privateer hopes will discourage high volume retailers that add no benefit to the hobby such as offering play space or conducting hosting tournaments or organized play. The stick to get stores in line is delayed access to new releases from Privateer Press.

There is no indication yet as to how Privateer plans to police the retail level to insure compliance. I assume the company will first look at those retailers with a history of egregious discounting with no in store play to support them and direct distributors to delay new releases to those stores.  No indication if the new policy applies to Amazon, arguably the most egregious "free rider" of them all.
Posted by Castle Perilous Games at 7:35 PM No comments:

This week's ICV2 column looks at a survey of over 1000 Warhammer 40,000 players and some of the findings, such as that Eldar are viewed as the most powerful army.
Posted by Castle Perilous Games at 9:55 AM No comments: 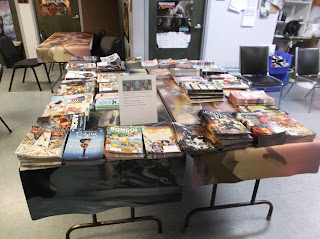 Saturday is the 15th annual Free Comic Book Day and if you saw the news on WSIL 3, you know we have a number of events going on to celebrate:

All graphic novels Buy one, get one of equal or lesser value, 1/2 off

10 a.m. to noonish:  Sketches by Matthew Miller of Capybara Ink
10 a.m. to 1 p.m. Meet the hosts of WDBX's Nerd Heard
Noon to 4 Meet Stimpy, a rescue cat from the Humane Society of Jackson County. While Stimpy is here, we will donate 10% of all purchases to the Humane Society.
Noon to 4:  Meet the members of the Southern Illinois Steampunk Society and talk steampunk and comics with them.
4 to 7:  Meet the members of the So Il Roller Girls. Get autographs and photos and find out more about roller derby.

While they last cookies from Insomnia Cookies and coupons from Fat Patties. Free cotton candy courtesy of Murdale True Value.

La Unica Bakery will be selling pastries to those waiting in line prior to our opening the doors.

Posted by Castle Perilous Games at 10:10 PM No comments:

This week's ICV2 column focuses on International TableTop Day
Posted by Castle Perilous Games at 7:30 AM No comments: