Comics account for about 10% of our sales and back issues for a fraction of that, so, if you bring in back issues, we are not going to offer you much for them, even less if they were released in the last 25 years or so. When you hear about back issue comics going for big bucks, it is because they are RARE. That is the whole supply and demand concept kicking in there.

From their inception back in the late 1930s through about the 1970s, comic books were viewed as something kids read. You were a kid once. How did you treat your things? Right, roughly. That is the way we treating comics as well. We folded them up and stuck them in our back pockets or cut out the coupons to send off for sea monkeys or inflatable ghosts. Kids didn't treat them well.

As those kids grew up, they got nostalgic for the comics of their youth and started collecting them.  There weren't that many around anymore though so scarcity drove demand, meaning the prices on the comics those kids read increased in value. However, as adults realized there was money to be made in comics, they started saving current issues , hoping they would drastically increase in value. Some did. Most didn't. So if you come in with a long box full of Wild CATS #1, we will offer you about $5 for the whole thing, as the market is glutted with titles on which people speculated. What are recent books that you ought to keep an eye out for? First issues of long running series like The Walking Dead or Saga or issues in which a popular character debuts, like Marvel's  X-23. Bringing in a collection of Marvel's Darkhawk or DC's Stars and STRIPE, both of which are lower tier characters, will get you a very low offer, since collectors of those books are sparse.
Posted by Castle Perilous Games at 9:42 PM No comments:


Dear Official Tournament Stores,
As many of you have experienced recently there have been overwhelming requests for the recently released Dark Saviors Special booster from retailers and players alike.  Since its release, the ability of our players to obtain the desired cards coupled with the escalating cost to do so, has left them a bit frustrated with the limited available inventory that currently exists.  In an effort to remedy this situation and satisfy the player base we will be releasing an unlimited version of this product in mid-July.  The product will be extremely limited in number.
Posted by Castle Perilous Games at 8:03 PM No comments:

The Importance of Stores and Salespeople

this article asking if the sales person is dying as a job category caught my eye, that and the discussion of the growth of the concept of “retailtainment” as the direction in which retailing will move.
If you have read the linked article, there are a couple of points with which I would take issue:
1)      The author grossly overstates the importance of online retailing to the overall retail sector. Although it has grown rapidly, online retailing still accounts for only about 10% of sales in the entire retail sector.
2)      The retail sector typically ramps up hiring for the holiday season in September through November then lays off a lot of those hires after Christmas, so an 89,000 person decline in retail sales people may not be that out of line for the period October to now.
Retailing remains important though with 1 out of every 10 people in the US employed in retailing and it is still where most people get their first job and learn valuable skills, such as interacting and working with other staff members and the public, time management and personal  responsibility , that will serve them, if learned properly, throughout their life. However, unlike when I first entered retailing in the 1980s, people no longer spend their careers as retail salespeople. Movement by stores towards part time work, lower wages and fewer, if any, benefits (and I am talking things like health insurance and retirement plans, not free snacks and a discount off game purchases), have kept employee turnover high across the industry, approximating  67%, meaning the average retailer has to replace two-thirds of their staff every year. This is why many large chains have moved toward self checkouts with only one staff member monitoring 4-6 check out stations while Amazon tests staff less stores, where the customer selects items off the store shelf, scans the items themselves and the purchase gets billed to their Amazon account. Simple once set up and no human interaction needed. Will this happen quickly? Nah, too much infrastructure needs to get implemented for retailers to adopt the model widely anytime soon, but it is coming.
This is why stores will move toward the “retailtainment” model,  in which customers are entertained while they shop. Customers want an experience to go along with their shopping, which is why they flock to a new restaurant when one opens. Dining there is a new experience, one they cannot get elsewhere. In fact this is why new stores have heavy foot traffic for the first few weeks after opening. Customers looking for a new experience stop by to check it out, but once the new wears out, they head off to the next experience.
So what do game stores have to do? Create experiences. Tournament model stores, those with as many or more tables than retail space, already do this, creating weekly or daily experiences for their customers. The rest of us have to use atmospherics (appealing to the senses) to bring the customer back. Stores and salespeople aren’t passé but we will have to work even harder to remain relevant.
Posted by Castle Perilous Games at 10:03 PM No comments:

While Quantities last, bring in a friend, show them how to play Magic, they get a free demo deck and promo card, you get a promo card. Don't know anyone who doesn't already play Magic? Bring in your Magic playing friend, play a game of Standard and you both get a promo Card.
Posted by Castle Perilous Games at 6:36 PM No comments:


Get ready to dispense some Dueling justice this holiday season when the Yu-Gi-Oh! TRADING CARD GAME presents Legendary Hero Decks! This box set comes with 3 unique Decks featuring the kind of monsters you’d want on your side if the fate of the world depended on the outcome of a Duel!

Fulfill Your Destiny!
Aster Phoenix’s Destiny HERO Deck excels at driving opponents into a corner with effects that inflict damage or pierce through defending monsters. Like Jaden’s Elemental HERO Deck, the Destiny HERO Deck also Summons powerful monsters through Fusion! This Deck also includes 2 new “HERO” Link Monsters you can use in any HERO Deck: A Link-2 monster that retrieves your Fusion Summoning Spell Cards from the Graveyard and a high-ATK Link-3 monster with Link Arrows that all point towards your field, giving you space to summon 3 Fusion Monsters at once!

Return of the Aesir!
Thor, Loki, and Odin once again descend upon the Dueling world! Boasting some of the highest ATK values among all Synchro Monsters, Team Ragnarok’s ace monsters from Yu-Gi-Oh! 5D’s hold a special place in the hearts of Duelists. Now, a new Link Monster makes it easier to assemble the Synchro Materials needed to Summon an “Aesir” monster, and this Deck’s Extra Deck also comes with more high-powered Level 10 Synchro Monsters, including the legendary Ascension Sky Dragon!

The Phantom Knights Strike Back!
Phantom Knight Decks focus on Xyz Summoning and using Trap Cards to turn the tides of battle. Almost all of their monsters, Spells, and Traps have additional abilities you can use once they’re in the Graveyard, creating opportunities for huge comebacks! This Deck includes a new Trap Card and a brand new “Phantom Knight” Link Monster that Sets Trap Cards directly from your Deck and can destroy any card on the field when a DARK Xyz Monster is Special Summoned to a zone it points to!
Posted by Castle Perilous Games at 4:00 PM No comments:

Here are the Origins Award winners for the best tabletop games of the year:

This week's Rolling for Initiative column looks at this Saturday's Free RPG Day and why we like it. We will have pictures up this evening of this year's offerings.
Posted by Castle Perilous Games at 8:49 AM No comments:

The Unrivaled Boardgame Tabletop Championships, which premiered last year with $4  million spent on launching last year's tournaments and some $100,000 in prizing, cratered dramatically this year, to the point that the company has cancelled this year's tournaments and will refund the money collected from the 200 or so stores that had already signed up to participate:


Unrivaled was simply born from our love of tabletop gaming and the vision of bringing together players and events on a local and national footprint.  We debuted Unrivaled World Tabletop Championships in 2017 and spent over $4 million to launch and run the tournament all the way through the Finale in Las Vegas.  Our plans for 2018 included more games, a larger prize pool and an extensive level of support to bring local retailers and venues into the action.

Recent unexpected changes have occurred with the financial status of our parent company, Oomba, Inc.  Given these changes we are no longer confident that we will be able to fulfill a quality product for this year’s Unrivaled tournament.  We believe it is in everyone’s best interest that we cancel the event this year and do everything in our power to make all partners and participants whole.  This orderly wind-up will be taking place immediately.  It is with our deepest regret to announce this change in plans.

Posted by Castle Perilous Games at 6:45 PM No comments: 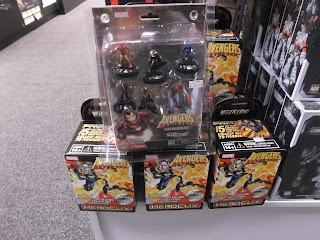 Just got in a restock of the HeroClix Avengers Infinity boosters. These sold out in one day when we got them originally so stop by soon if you want to pick some up. We will host the postponed release tournament on June 10th at 3 p.m. $20 entry

Posted by Castle Perilous Games at 9:52 PM No comments:

This week's Rolling for Initiative column compares the premier customizable boardgame, Gloomhaven, to the recently announced Betrayal Legacy and discusses why Goomhaven has remained so popular.
Posted by Castle Perilous Games at 9:34 PM No comments: