The Lights Fantastic Parade will pass about half a block east of the store so roads will start closing later afternoon. Here is the press release from the city:

The parade will begin promptly at 6 p.m. along Mill Street and will travel north on Illinois Avenue to Town Square.

Parade goers are encouraged to arrive early to avoid road closures and detours along Illinois Route 13 and U.S. Highway 51 from 5-8 p.m.

West Bus Service and Jackson County Mass Transit will provide rides to the parade from Murdale Shopping Center, University Mall, SIU Arena and Student Center. Buses will pick up passengers every 15 minutes between 4-6 p.m. Buses will return passengers following the parade.
Posted by Castle Perilous Games at 12:40 PM No comments: 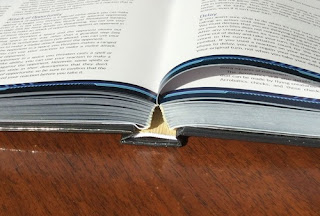 About 2% of the Starfinder books that shipped last summer had a defective binding. We haven't had any complaints from customers but if you did happen to get a defective copy from any store in Southern Illinois, bring it here and we will swap it out for one of the new copies we just got in. Note that we will only exchange books with this specific defect as that is the only problem Paizo has authorized us to exchange. Any other problems, you will need to contact Paizo directly
Posted by Castle Perilous Games at 2:30 PM No comments:

This week's Rolling for Initiative column looks at 5 things the store is thankful for this holiday season.
Posted by Castle Perilous Games at 10:17 AM No comments:

Boardgame of the Week: Camelot 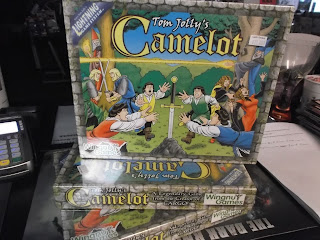 In Camelot, players vie for control of Excalibur. Each player controls five Arthurs and a host of other Arthurian characters in a heated attempt to grab and retrieve the sword before any other player succeeds in this task.
On the surface, the game appears to be a very simple wargame, combat being quickly resolved without any dice as characters fight each other. The key to the game, however, is that two players are always taking turns at the same time, the turns being regulated by "turn tokens" that pass around the board. When one player finishes his or her turn, the turn-token is passed to the next player who does not already have one. If one player is a slowpoke taking his turn, then the other turn-token passes around the table, allowing other players to take turns. This forces players to take very fast turns, usually about 5 seconds each, allowing the game to move along with the intensity of a video game. Games usually take 20 to 30 minutes to play, even with three to six players.
Special rules resolve potential conflicts that could occur when two players try to perform actions simultaneously where priority is in question, resolving quickly and simply.
No player ever quite gets knocked out of the game due to loss of characters; Arthurs always "rejuvenate", returning to your pile of pieces (your "village") that can enter the board. Characters start at a chosen entry space at the edge of the board, and move to the center to grab Excalibur, returning the Sword to their entry space to win. Each of the 5 character-types (Merlin, Lancelot, etc) have their own unique abilities, but everyone starts with an identical set of pieces.
There are also two variants in the rules, allowing players to vary the game by going after the "Accoutrements of Kingship" instead of the Sword, or by gathering a number of gold pieces scattered around the board so as to "buy the kingship". Tokens are included for these variants.
The game is very intense and fast, requiring players to think on their feet and make fast realtime decisions; if you are a big fan of slow, deep thinking, strategy games, you might look elsewhere.
Posted by Castle Perilous Games at 8:12 PM No comments:

RPG of the Week: Tome of Beasts 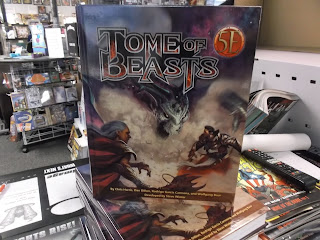 Kobold Press has done some very nice material for 5th edition, following the demise of their print version of Kobold Quarterly. One of the best releases from the company has been the 5th Edition compatible Tome of Beasts.  Every D&D game needs more monsters and this book has over 420 pages of them, all 5th edition, well technically OGL, compatible.

Posted by Castle Perilous Games at 3:34 PM No comments:

This week's Rolling for Initiative Column looks at the laws of supply and demand and their effect on the sales of Iconic Masters and Xanathar's Guide to Everything. Yes, it's an economics lesson.
Posted by Castle Perilous Games at 8:02 PM No comments:

RPG of the Week: Volo's Guide to Monsters 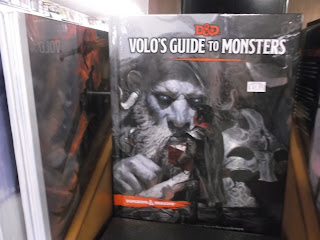 Almost everyone agrees (except for the odd player killed by one) that you can never had too many monsters in a D&D game. Unfortunately, D&D 5th edition only had one official book of monsters, the Monster Manual, until this one came out last year, chock full of monsters and more monsters. Incidentally, there are two covers to this book, the standard one shown in the photo and the limited edition, which had a single run last year. Copies of the limited version, which only differs from the standard version by the cover, contents are the same, regularly sell for over $100 on eBay.
Posted by Castle Perilous Games at 8:23 PM No comments: 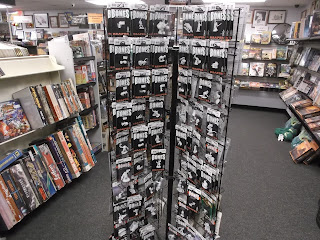 One comment from the online survey we are conducting was the lack of the Bones line of figures from Reaper. Agreeing with the respondent, we got in the top 100 figures in the Bones line today as well as a box of the new figures Reaper released this month.
Posted by Castle Perilous Games at 9:00 AM No comments:

Board Game of the Week: Twilight Imperium 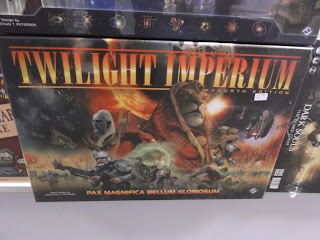 Another game from the Fantasy Flight stable, Twilight Imperium has gone in and out of print a number of times over the past 20 years and is one of the most complex boardgames we sell that is not a wargame. A game designed for those who like their games relatively complex and both strategic and tactical, Twilight Imperium also demands a significant amount of time to play. We played it during a Tuesday night Gaming With Gary session and it took about an hour and a half to get through the 1st turn. However, once you have played a game, subsequent ones play much more quickly. You can expect a game to take 3-4 hours though so either set aside an evening for it or a table, without cats, where you can leave it set up safely.
Posted by Castle Perilous Games at 7:55 PM No comments:

Amazon and the Future of Retailing

This week's Rolling for Initiative column looks at the future of retailing as influenced by Amazon.
Posted by Castle Perilous Games at 7:39 AM No comments:

One of the responses to the survey now running on the Facebook page asked us for an online listing of our out of print and rarer items. We have had  an Bay store for a couple of years now and regularly list items there. We very seldom post new items there since it is quite easy to find those new items elsewhere on the interwebs for less but we do make an effort to post 1-10 items daily from our massive stock of used and out of print items, almost all with free shipping.

Why not on our own site? Mainly because eBay has already done all of the work to set up a very efficient online sales sales system that there is no reason for us to duplicate and using eBay is more cost efficient, at our sales level, than selling through Amazon.

If you see an item we have listed on eBay and want to order it directly, just email or call the store. We will also gladly sell you items listed on eBay if you ask about them while you are in the store.
Posted by Castle Perilous Games at 5:40 PM No comments:

Board Game of The Week: Tapple 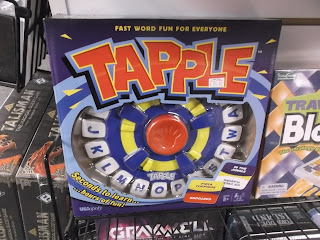 Tapple, from USAopoly is a great party or family game. In Tapple, players select a category such as pizza toppings, the the first player taps a letter that starts an item in that category such as C for "cheese" then hits the timer, starting it for the next player. As the letters get tapped, it gets harder and harder to come up with an item for the untapped letters. If a player cannot think of one before the timer goes off, they are out of the game and play continues until only one is left. A game is generally over in 10 minutes or so but there are dozens of categories from which to choose or you can even come up with your own so great replay value.

Posted by Castle Perilous Games at 1:44 PM No comments:

RPG of the Week: Compact Combat 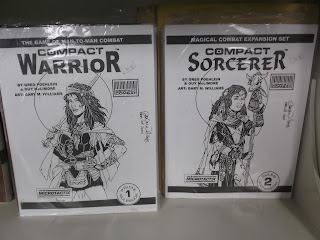 Remember when I talked about the origins of GURPS last week and how it was based on a couple of stand alone systems, Melee and Wizard? Here is a similar system from Microtactix, a small game company active in the Evansville Indiana area in the early 2000s. Most of the products from Microtactix were print and play miniature figures and terrain, similar to the Cardboard Heroes sets from Steve Jackson Games. Instead of the d6s used by Melee and Wizard, Compact Combat used d10s. Gameplay, otherwise, was uncannily similar.

Posted by Castle Perilous Games at 3:14 PM No comments:

This week's Rolling for Initiative column looks at some Facebook statistics from an eBook the company recently sent out.
Posted by Castle Perilous Games at 7:51 AM No comments:

RPG of the Week GURPS 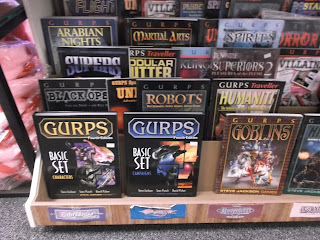 GURPS is the Steve Jackson Games version of Metagaming's The Fantasy Trip, which was composed of Melee, a combat system, and Wizard, a magic system. I actually started off playing RPGs with The Fantasy Trip, since it was  more "realistic" than D&D, as your dexterity and agility rather than your strength determined if you hit or missed your opponent. Strength determined the amount of damage while your intelligence determined how many spells you could cast but with a spell point system rather than the Dying Earth system of D&D.

Steve Jackson worked for Metagaming during the late 70s and early 80s, coming up with the concepts of Ogre and Car Wars while there as well as much of The Fantasy Trip. When Metagaming went out of business, Jackson took Car Wars and Ogre to his new company, Steve Jackson Games. he attempted to purchase The Fantasy Trip as well but the owner of the company reportedly asked in excess of $100,000 for the rights. Instead, Jackson took the core concepts of TFT and expanded them into GURPS, the Generic Universal Role Playing System.

Posted by Castle Perilous Games at 7:03 PM No comments:

Boardgame of the Week Kaiju Crush 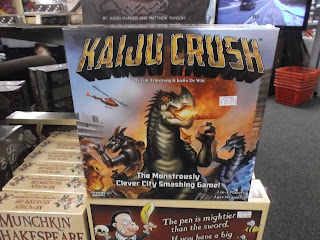 Selected for this week Kaiju Crush for two reasons:
1) It just came in this week and is a very fun boardgame, somewhat similar to King of Tokyo, and any game in which you get to crush buildings is great
2) the designers from Fireside Games visited us and demoed the game in early October and we got promo items for the game to give away with a purchase.
Posted by Castle Perilous Games at 8:30 PM No comments: