Trailer for the upcoming release of the straight to DVD The Last Lovecraft. From the promo information sent out for it:

Jeff, a down on his luck office worker finds out he is the last living relative of horror novelist H.P. Lovecraft. What he doesn't know is that Lovecraft's monsters are real and will soon threaten the very existence of mankind. Jeff and his best friend Charlie are forced to embark on a perilous adventure and they enlist the help of high school acquaintance, Paul, a self-proclaimed Lovecraft specialist. Together the three unlikely heroes must protect an alien relic and prevent the release of an ancient evil, known as Cthulhu.
Posted by Castle Perilous Games at 6:17 PM No comments:

WizKids/NECA announced the release of a couple of Lord of the Rings HeroClix games this week with both games scheduled to release in the second half of 2011. One will use the traditional HeroClix bases and rules and play as a standard HeroClix miniatures combat game. The other is more plays more as a traditional board game with players taking the roles of Nazgul both co-operating and working against each other to prevent the Ringbearer from taking the One Ring to Mount Doom.

I'm not as excited as some other store owners are about the release of LOTR HeroClix for a couple of reasons. First is the track record of LOTR as a collectible miniatures game. Sabertooth Games released a LOTR collectible miniatures game back in 2003 at the height of interest in the Lord of the Rings movie, the year that Return of the King won the Oscar. While game play wasn't great, Board Game Geek's members still rated the system a little over six. Still, and despite the high quality of the figures, sales of the game ended along with Sabertooth's collapse as a company, and while many of Sabertooth's games were picked up and re-released by Fantasy Flight Games, FFG opted not to do anything with the LOTR license. If FFG thought the the game had longer term potential, the company would have opted to release a version of it.

The second major problem is that licensed products, such as LOTR, need to have the core license available in order to draw interest in the line. The last movie in the LOTR trilogy released in 2003 and the next one to relate to the franchise, The Hobbit, won't release until 2012 and most of the characters from LOTR either won't appear or only have limited appearances in the movie. Witness the sales of Games Workshop's Lord of the Rings line of miniatures. Thought it sold quite well while the trilogy was in theaters, and for a limited time afterwards, the line has languished for much of the last decade. Releasing a Hobbit HeroClix game would make sense, taking advantage of the excitement surrounding the movie, then release a LOTR set afterward.

I do expect this to sell but not in large quantities and nowhere near the amount that I would expect from a new Marvel or DC HeroClix set. Even at the height of its popularity, the Sabertooth CMG never sold anywhere near the levels that a new superhero HeroClix set did.
Posted by Castle Perilous Games at 11:58 AM No comments:

Posted by Castle Perilous Games at 11:03 AM No comments:

Why Do RPGs Fail 2

Following up on last week's post on Why RPGs Fail, I would argue that consistency of releases is the major reason. Even though people have complained about the design of D&D, saying it is too abstract, not realistic enough, arbitrary, the system has managed to remain viable for 30 years. Only recently has the Pathfinder system started supplanting it in some areas. For 30 years, support material has arrived for D&D/AD&D regularly as clockwork. The core rulebooks have only gone out of print at one time, just prior to the release of the third edition rules, in order to clear 2nd edition material out of the distribution channel prior to the release of 3.0.

Similarly, Shadowrun has remained almost continuously in print since release, with supplements arriving regularly, not as often at D&D, but still much more so than R. Talsorian's Cyberpunk, which let the core rules go for so long, despite a significant catalog of support materials, lost much market shart and consuemr interest because of the lack of the core rulebook.

Tunnels & Trolls, despite having been in print almost as long as D&D, had some success in the 1980s but since then has never come close to growing a large player base. Again, I attribut this to the lack of consistency of releases. While the core rulebook is still available, the company has release few supplements or adventures for it, in print form, for over a decade.

To put it simply, in order to make an RPG successful, a company needs to keep the core rules in print, so that customers can find it and a steady stream of product releases, so that players know the company plans on supporting the line long enough for them to get investing in an d keep playing it.
Posted by Castle Perilous Games at 1:10 PM No comments:

Why Do RPGs Fail

I was looking at the wide variety of RPGs on the store shelves recently and got to wondering what separates a Dungeons & Dragons from a Chivalry and Sorcery, a Pathfinder from a Lord of the Rings, a Shadowrun from a Cyberpunk? Why is one comparatively successful in the industry while the other, after some initial success goes out of print or languishes in relative obscurity. Chivalry &Sorcery, Lord of the Rings and Cyberpunk all had substantial success during their first release, but the relaunch of C&S soon fizzled, LOTR died as Decipher imploded and the release of an updated Cyberpunk may have done well in direct sales but hasn’t gotten any footprint in brick and mortar stores. Some thoughts on why to come.
Posted by Castle Perilous Games at 3:19 PM No comments:

From ICV2, Steve Jackson Games has announced three new Munchkin products for the first quarter of the year:

Steve Jackson Games has announced the upcoming release of three new Munchkin products during the first quarter of 2011. There will be one new release each month in January, February, and March.
In January, the Munchkinomicon expansion set will arrive with 15 cards suitable for use with any Munchkin game. The focus is Munchkinly magic spells and the dreaded Munchkinomicon itself. The cards are not random or collectible: every pack is identical. This will be a sealed pack with a suggested retail price of $4.99. 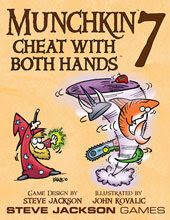 Munchkin 7: Cheat With Both Hands is scheduled for February release. The newest expansion to the Munchkin game adds even more powerful cards to the game, including the “Ultra Munchkin,” “1/3 Breed,” and “Cheat With Both Hands.” This expansion replaces Munchkin Blender and More Good Cards, and includes card originally included in those sets. Suggested retail price will be $19.99.

Following up on Tuesday's post, I wanted to discuss the economics of bringing in a line of miniatures to a store. If you've been into the store in the past 6 months, you'll (maybe) remember we have a large selection of Games Workshop figures, large enough to qualify as a partnership store, of which there are only about 150 in the US. We also carry a good selection of Battletech, Reaper, Hordes and Warmachine, though not complete and nowhere as large as our Games Workshop area. We also have a good sized selection of Confrontation, mainly because, before Rackham got into financial difficulties and starting shifting distribution methods, we had a good sized Confrontation crowd. We carry a smattering of other miniature lines including Aidken, Hundred Kingdoms (both of which are now marked 25% off), Uncharted Seas, Flames of War, Mallfaux, All Things Zombie and Cool Mini or Not. We choose not to carry these lines in depth because, for two reasons, miniatures are the most expensive things for a game store to stock.

Reason number one is just the individual cost of the figure. A single Reaper figure retails for $5-6 each, while Battletech figures are in the $10 neighborhood. Games Workshop and Flames of War figures are in the $15 to $20 neighborhood and Confrontation figures regularly exceed $20. Games Workshop tells retailers to expect to spend $5000 to $7000 to bring in a decent supply of their Warhammer Fantasy and 40,000 figures and the initial buy-in for Battlefront's Flames of War isn't much cheaper. For the cost of fully stocking one miniatures line, a store could easily build a very respectable RPG, boardgame or CCG selection.

The second reason is that most miniatures these days are designed to work with a specific miniatures system. Warhammer Fantasy Battle players aren't going to want to use Mallfaux figures in their games and vice versa. Unlike 15 to 20 years ago, almost every miniatures line is tied to its own system and players, rightly, want to buy figures that will work with the system they choose to play. As mentioned above, for most miniature systems, a store needs to spend several thousand dollars to fully support the line. There are a few lines, such as Mallfaux and Uncharted Seas, that a store can stock reasonably well with the rulebook and core army sets, but even they eventually add on additional blisters or clamshells of individual support or leader figures, bumping the cost up further.

The cost is the reason most stores only stock 2-3 miniature lines in depth, Warhammer 40,000 most often because it is the most widely played miniatures game in the US so stores can reasonable expect a player base in their region and customers to buy the figures, so the store restocks them, so customers buy more, lather, rinse, repeat. The second line depends on what customers want to play (and buy). Over the past 15 years, based on store play and sales, we have brought in (that I remember): Warzone, Chronopia, Legions of Steel, Thunderhead, Battletech, Warmachine, Hordes, Wargods of Aegyptus and Confrontation. There are probably a few others I've forgotten. Currently, we're heavily supporting Warhammer 40,000 and working to build Warhammer Fantasy Battle and Warmachine back to reasonable sales levels. I expect to see in store play in those resume steadily in six to eight months. Heck, even mighty Warhammer 40,000 was down to 3 players about 4 years ago.
Posted by Castle Perilous Games at 4:15 PM 1 comment: