WOTC has announced a Legacy version of Betrayal at House on the Hill. Interesting idea but the Legacy fad seems to have tapered off. Risk Legacy did really well as the first title in the category and the first "season" of Pandemic did well. Seafall, however, the first Legacy game without a tie-in to another franchise, pretty much crashed and burned. FFG sold it off at a pretty seep discount on the company website last Christmas.

Charterstone has done OK, although it did not call itself a Legacy game; nor did Gloomhaven, though Gloomhaven is selling on other points, such as its sheer size and difficulty to get. If Gloomhaven was readily available, I don't think we would see nearly the demand for the game that we currently see.
Posted by Castle Perilous Games at 9:45 PM No comments:

This week's Rolling for Initiative column looks at the marketing concept and how it has broadened over time.
Posted by Castle Perilous Games at 1:31 PM No comments:

This week's Rolling for Initiative column looks at who I think are the most likely purchasers of Asmodee, given that the owners, a private equity form, have announced the are looking at selling the company
Posted by Castle Perilous Games at 2:16 PM No comments:

AEG's popular Love Letter card game recently sold to Z-man Games, part of the Asmodee group. Here are some of Scott's thoughts on the matter in this week's Rolling for Initiative column.
Posted by Castle Perilous Games at 7:00 AM No comments:

The Academy of Adventure Gaming Arts and Design announced the nominees for the 2017 Origins Awards, honoring the best games and supplements in the game industry:


The purpose of the Origins Awards is to acknowledge excellence in game design. The Origins Awards are the oldest and only peer-based award system for the hobby games market.
The Academy of Adventure Gaming Arts and Design presents these awards to companies for outstanding games in the hobby games industry. This year, the Awards have eight categories: 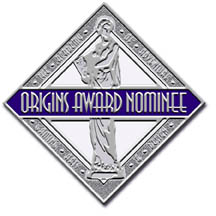 Board Games (12 Nominees)
Card Games (10 Nominees)
Collectible Games (10 Nominees)
Family Games (10 Nominees with Foreman)
Miniatures (4 Nominees)
Roleplaying Game (12 Nominees)
Roleplaying Supplement (13 Nominees)
Game Accessories (7 Nominees)
Congratulations to this year’s nominees.
The nominees in each category will be voted on by a jury of professionals from the hobby games industry. Attendees will have the opportunity to play the games that have been nominated and vote on the Fan Favorite for each category at Origins Game Fair. Winners will be announced at the Origins Awards Ceremony on Saturday June 16, 2018, during Origins Game Fair.
Additional information regarding the Origins Awards can be found at www.originsawards.net.
Posted by Castle Perilous Games at 9:03 PM No comments:

Z Man Games announced it has acquired the rights to the Love Letter line of games, including Love Letter Premium and Lovecraft Letter, from AEG. What does this mean to you? If you are a consumer, not much as Z Man plans no changes to the game. Actually, you may see one problem. Z-man is notorious for lengthy out of stocks of its product (The On The Brink expansion for Pandemic has been out of stock since last summer and we don't expect to see it arrive before June) so I can foresee lengthy out of stocks for the game in the future.
Posted by Castle Perilous Games at 11:19 AM No comments:

A look At Anchor Points

This week's Rolling for Initiative column looks at the concept of anchor points.
Posted by Castle Perilous Games at 7:33 PM No comments: