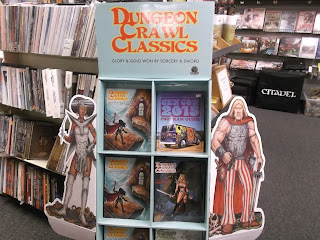 Much like Pathfinder and Castles and Crusades, Dungeon Crawl Classics started life as a series of adventures created under D&D 3.0's Open Gaming License. Like the other two, the adventures proved popular enough that Goodman Games is one of the few companies remaining from the 3.0/3.5 Edition era, still publishing modules for the D&D 5th edition game as well as material for what became its house system Dungeon Crawl Classics.

Similar to Troll Lord Games C&C, Dungeon Crawl Classics opts to use its modified 3.0 edition rules and create adventures that have the feel of 1st edition AD and D adventures, with names reminiscent of the early TSR adventures such as "Beyond the Black Gate" and "The Sea Queen Escapes".