RPG of the Week Rifts 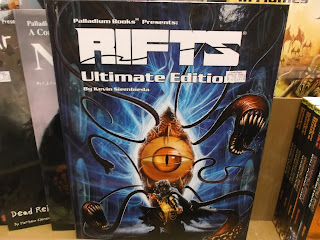 Rifts has been around since the 1980s, starting out as the Palladium Fantasy RPG, then, as Palladium Games slowly put up more RPGs using the same basic system, gradually developed into the first, and longest lives, multi-genre RPG. Both GURPS and Torg attempted to do something similar but GURPS never managed to make a system that allowed you to take the same character, without modification, from one genre or universe to another, while Torg was an interesting experiment that failed to find an audience.

If you look closely at the underpinnings of Rifts, you can see its roots in the original D&D system, with its character classes and alignment systems, as the creator, Kevin Siembieda, had a hand in many of the early Judges Guild products. However, Rifts has transcended its roots and now stands as its own system, which has developed into a fantasy/high-tech cross over that still has a strong following all these years later.