Boardgame of the Week Talisman 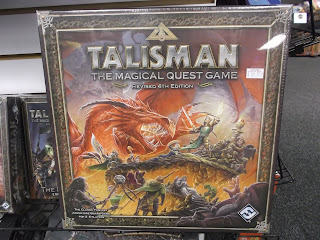 To complement the RPG of the Week, we will start focusing one post a week on a boardgame. This week's game is Talisman, which first came out in the 1980s and has gone in and out of print ever since. I can best describe Talisman as "D&D on a board", although games like Descent and HeroQest do a better job of replicating the D&D experience. Players start off as a character with certain abilities and traverse the board increasing their strength until they can do battle with the dragon lurking at the center of the board.

Much like the classic dungeon crawls of the era, the outer rim (upper levels) are relatively easy to combat and the adversaries get more dangerous the closer you get to the center of the board. The game can take hours to finish  but players generally stay engrossed until the end (or decide to quit).
Posted by Castle Perilous Games at 1:30 PM