RPG of the Week OG 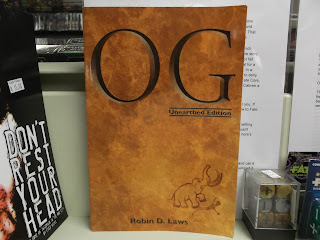 This week's RPG is one that does not lend itself to campaign play but rather to one-off sessions, so one off that Scott could be induced to run a game of it if someone approached him properly. Og has been around since the late 1990s in one form or another. The Unearthed Edition dates from 2007 and in the game, everyone plays a stereotypical caveman, or at least as stereotypical a caveman as they can given how much we know about cavemen. Incidentally, these cavemen can, if the GM wishes, co-exist with dinosaurs. Roll with it.

The key thing to remember about Og is the words. Remember how your parents told you to "Use your words" when you were young? Here, you have a maximum of 18 of them and must communicate your actions and wishes to other players using only your known words, such as "You", "Me", "Hairy" and "Bang" and gestures. You may describe what you are doing to the GM using your regular vocabulary but will get penalized should you use that same vocabulary with your fellow players.
Posted by Castle Perilous Games at 6:58 PM