RPG of the Week Tunnels and Trolls 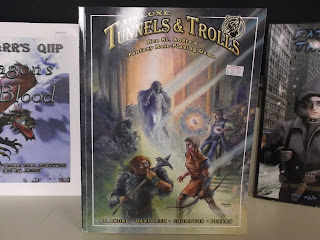 If you are looking for an easy to learn and easy to play RPG, you cannot do much better than Tunnels and Trolls. T&T, considered by many the second RPG to hit print (it released about 6 months after the original D&D did) and one of the simplest as well. With spell names like "Take That, You Fiend" "Hidey Hole" and "Freeze Pleeze", it is obvious that designer Ken St. Andre  had a sense of humor when it came to spell creation, among other things. Still TnT is a very well designed game and is still in print, just like D&D and unlike so many of the RPGs that debuted in its footsteps.