The Coming of Kaijudo 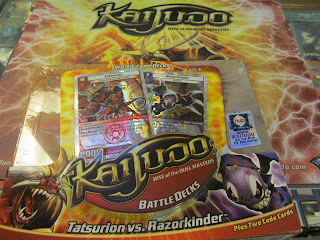 WotC is once again pushing the re-launch of Dual Masters, now called Kaijudo with a pre-release event for the set on March 16.  The game has not gotten much traction here but we will see how giving out free decks and promo cards does to jump start it (again).  WoTC first pushed Dual Masters back around 2000 with a huge promotional event including multiple free booster tournaments but the game quickly disappeared once the freebies did.

Pity, as it is a pretty good game, combining aspects of both Magic and Pokemon (making it one of the top selling games in its home country of Japan).  However, it lacks both the complexity of Magic and the cute factor of Pokemon, which may be why it didn't take off here the first time.  In general, marketing research shows there is only room for two top products in a category.  In the CCG area, those spots, in the specialty game channel, are held by Magic and Yu Gi Oh and in the mass channel, it's Pokemon and Magic.  Kajuido will find either one tough to displace.

Still , we will host the Pre-release event on March 16.  Come in and get a free deck of Kaijudo and a promo card.  Play Kaijudo and fill out your Achievement Card to earn a second promo card.