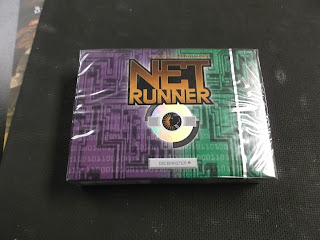 Most people are familiar with FFG's Netrunner Living Card Game.  However, over a decade earlier, WOTC released the NetRunner TCG, both the company's second Richard Garfield game and its second trading card game (Magic was first in both categories). In turn, the Netrunner TCG "universe" was based on concepts from R. Talsorian Games Cyberpunk RPG, using the idea of hackers trying to crack corporate dataforts.

Much like the modern version, one player had a corporate deck, while the other player had a runner deck. Unique among TCGs, the cards incorporated in the corp deck differed from those in the runner deck, as each player constructed their playdeck from a different card pool. Both the core game and its expansion Proteus, released in 1996.  A second set, Silent Impact, was developed but never released in that form, though a set of 52 cards from it came to the market as the Classic expansion in 1999.
Posted by Castle Perilous Games at 7:23 PM